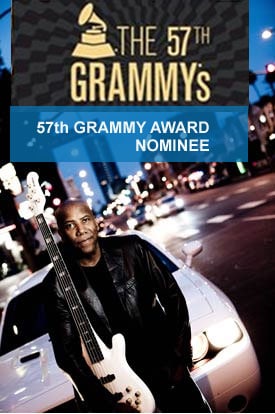 'Nathan East' is the culmination of Nathan's 40+ year career as the world's most in-demand studio and touring bassist and the album calls on many of Nathan's past collaborators including Eric Clapton ("Can't Find My Way Home"), Stevie Wonder ("Overjoyed"), Michael McDonald ("Moondance"), Sara Bareilles ("I Can Let Go Now"), Ray Parker Jr. ("Daft Funk"), Bob James, Chuck Loeb, David Paich and more. Nathan East was produced by Yamaha Entertainment Group Founder Chris Gero and engineered by Bryan Lenox.  For The Record, a new documentary on Nathan, debuts on Hulu this month offering a behind-the-scenes look at the recording process.

The nomination caps off one of the most exciting years in Nathan's career, which kicked off with a performance with Daft Punk at the 56th Annual GRAMMY Awards; included appearances on Tonight Show, Arsenio and Tavis Smiley; and next month will see Nathan inducted into the Hall of Fame on January 24 at the NAMM TEC Awards.