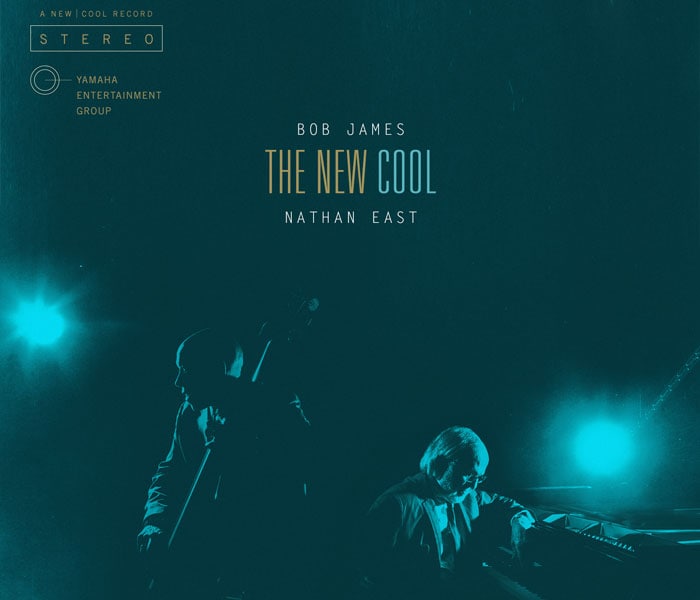 After 25 years of collaboration, James and East released their debut duo album, The New Cool, on Yamaha Entertainment Group. The New Cool marks a new territory for legendary jazz pianist James and master bassist East, who’ve spent decades playing together in the contemporary jazz quartet Fourplay, but never before as an official duo.

"The more I played with Nathan over the course of many live performances and spanning more than 20 years, the more in sync we were whether or not we had the anchor of the drums," says James. "Something special happens when we only have each other’s notes to play off of, when the music is totally exposed."

Recorded entirely in Nashville, Tennessee, the album is a collection of original material contributed by both James and East, along with a small selection of standards. The duo’s musicianship is laid bare in a soulful reimagining of Irving Berlin’s "How Deep is the Ocean," while the pair is joined by strings and woodwinds for a surprising take on Willie Nelson’s classic country hit "Crazy" featuring a stunning lead vocal from Vince Gill.

"The New Cool was such an exciting project to be a part of," said Chris Gero, founder and vice president of Yamaha Entertainment Group. "When I put Nathan and Bob together in the recording studio, I had no idea we would emerge with such a unique album that is truly unlike any other in the world of smooth jazz. Nathan and Bob are two exceptionally talented musicians."

A two-time Grammy-winning jazz pianist, arranger and producer, James is recognized as one of the original founders of contemporary jazz. Long revered in the hip-hop community, his compositions are among the most sampled songs in history.

East was 16 years old when he went on the road with Barry White and has spent the last four decades playing with a who’s who of performers, including Quincy Jones, Eric Clapton, George Harrison, Michael Jackson, Phil Collins, Whitney Houston, Beyoncé, Barbra Streisand and Stevie Wonder. East performed on the 2014 Grammy-winning Record of The Year, Daft Punk’s “Get Lucky.”

The New Cool was produced by Gero, James and East. It comes on the heels of East’s Grammy nominated solo debut, Nathan East, released in 2014 on Yamaha Entertainment Group.

Below is a sampling of press highlights from early reviews:

"These jazz masters serve up a wholly rewarding and intimate set that’s at once new and very cool." – M Music & Musicians

"Jazz with no walls or eyes on the clock is what these rascals serve up as they corral Vince Gill, the Nashville Recording Orchestra and more as they let 25 years of playing together show off the telepathy and simpatico they have evolved along the way. Real music for real listeners, slip on the headphones, block out the noise and let the magic have its way." – Midwest Record Recap

"Musical events of this caliber are truly rare. If you are a Jazz fan, you must get your hands on this album as soon as you can… you will not be disappointed!" – Bass Musician Magazine

"The entire album of originals and a few, spare covers is an acoustic splendor of what piano, keyboards, and bass can do given the right circumstances, the right engineering — recorded in Nashville, and the right collaborative duo." – Examiner

"As friends and collaborators, the ease of which the two fused their talents with just a piano and upright bass was masterful. That camaraderie and spirit shines forth in every note of every song on ‘The New Cool.’…The result is a recording like none other you’ve heard from either of them as well as a beautiful representation of two legendary artists and their friendship." – Pink and Blue Notes

"With ‘The New Cool,’ Bob James and Nathan East won’t have any worries because they've given their fans a different side of their creativity in an array of formats and without the presuppositions that come with launching a new straight-ahead jazz acoustic project." – AXS

"An audacious 11 tracker that might surprise those who know them chiefly via their work with Fourplay." – Soul and Jazz and Funk

"A remarkable, yet unusual album of acoustic jazz from half the group Fourplay." – Keys & Chords

"Sophisticated grooves that shed full light on what makes East and James –and the rest of the Fourplay gang, no doubt—the true jazz icons they have become. There is simply no way you cannot love these eclectic guys." – The Smooth Jazz Ride

"The focus is to celebrate instrumental music being played in a real sense and for the listener to experience real instruments playing music in what might be regarded as the old-fashioned way." – Smooth Jazz Therapy

"Combining the best of the past while still exploring new and uncharted territory, is Bob James’ motto. With his companion Nathan East he remains true to this habit on ‘The New Cool.’" – Smooth Jazz Daily