For a period of just over three weeks, Singaporeans were given the opportunity of an insight into a strange, dystopian world: “Urinetown.” In case your eyebrows just went up because you haven’t heard of it before despite it having won several awards including three Tonys and even more nominations, and despite it nearing its 20th anniversary since debuting in New York City, fret not, yours truly was as surprised -- and curious.

“Urinetown” is a comedy musical set in a fictive city under the spell of a dangerously long drought, to which the government reacts by strictly banning the use of private lavatories. Instead, public toilets are to be used, operated by a company whose owner charges ever-increasing “pee fees” only to grow his own wealth. Citizens left with either going broke or, in case of an offence, being deported to “Urinetown” from where no one ever returns, can’t hold it anymore and start a revolution – of course, in the most hilarious, satirical way. 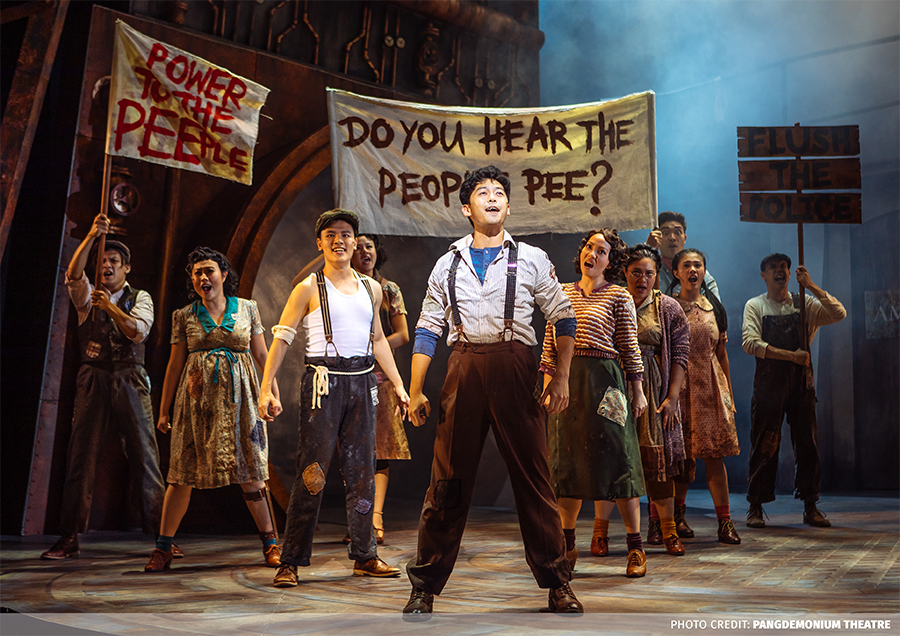 Reputed local theatre production company Pangdemonium staged the musical at the Drama Centre Theatre, located inside the Singapore National Library Building. To warrant a perfect sonic experience for the audience, sound design and system operation were assigned to Ctrl Fre@k, a firm known for excelling in design and control work of complex shows, orchestral and theatrical productions also far beyond the borders of home base Singapore.

Jeffrey Yue, Ctrl Fre@k’s co-owner and acclaimed sound designer/engineer, chose a Yamaha RIVAGE PM10 digital mixing system for managing all audio duties. We sat down with Mr. Yue to find out his reasoning and, of course, how it went.

You have worked on many musicals before. How did you approach sound design and control of Urinetown?

Urinetown is not a rock or pop musical. There are loud passages but, with it set in post-depression America of the 1930-40s and orchestration like piano, clarinet, saxophone, I would describe it as more “traditional”, with a mostly subtle, nuanced score. I love this style, not too much close-miking of the cast, the orchestra in the pit where it can be seen and heard, so we reinforced naturalistic sound just “on top” of it. It’s what I’m doing most of the time.

When bringing a full-scale two-and-a-half hours musical with a large cast and an orchestra to a stage, we usually require a more sophisticated mixing solution than what most house consoles adequate for other types of shows can offer. I have used the RIVAGE PM10 in the past for rock musicals, so I was very curious how it would work with neo-classical material such as Urinetown.

How did the setup go?

Different from Broadway or West End, where crews have several weeks for load-in and setup, in Singapore we have typically just very few days, mainly due to the tight booking schedules of venues and budget restraints. Actually, for Urinetown we had only just over two days for setup, followed by two to three days of rehearsals. Thankfully, we have virtual soundcheck. Recording everyone, musicians and cast, then returning and continuing to work on the same console – it’s a life-saver.

The layout of the RIVAGE PM10 surface is also very helpful for an efficient workflow. As opposed to other consoles, with the RIVAGE PM10 I can work on the left bay while my colleague Lee Yew Jin, who mixes the shows, works on the centre and right bays, without interference or even “elbow fights”.

What was the input channel count?

It was 17 cast members, all on radio microphones, a six-piece orchestra including percussion, playback sound effects, and effect returns such as from my external reverb in addition to the ones inside the console, all in all over 90 channels. The PM10 allows such high channel count, a lot of automation and processing, plus it fulfils my requirement to run everything at 96kHz all the way to the amplifiers.

How were the outputs configured?

First, the RIVAGE PM10 allows us to split all input channels, so each microphone channel got split in two with one going to FoH and one to monitors, each with completely separate processing. The orchestra used in-ear monitoring systems, and so did our engineer in the pit who looked after the musicians. In total we were using 22 matrix outputs, and then the outputs for loudspeakers from the Drama Centre Theatre’s inventory for on- and off-stage monitoring purposes like providing cast with audio from distant singers, or cues which they might otherwise not have heard. In addition to the front of house PA, for correct localisation we were as well using spot and effects loudspeakers on stage and upstage.

How were you and the console coping with such complexity?

We are constantly pushing ourselves to work both “well” and “accurately”, and to get the balance in between right. Urinetown is a complex production, quite high in my ranking of demand. We were running around 120 scenes. Few cues were sync’d and running automatically, but we triggered everything manually, including the majority of sound effects. We used lots of DCAs, lots of automation, and the RIVAGE PM10 did it all well and reliably.

Mixing a musical is vastly different from mixing a band at a concert. It’s like flying a helicopter without an autopilot, whereby one must hold on to the controls. It requires constant “line-chasing” and mixing even during dialogues as the use of multiple microphones leads to phase cancellation.

There was a scene where cast members were thrown off stage onto a crash mat, and we had to mute their mics and trigger a playback of their recorded screams concurrently, without any noticeable difference. Especially during the finale, when it went from storytelling to singing, followed by chorus movement, dancing and, subsequently, back to storytelling with polyphonic singing on top, while mixing the band and highlighting solos, and so on – the most lively scenes with pretty much everything happening. This is where automation comes in and it’s good to have a RIVAGE PM10. 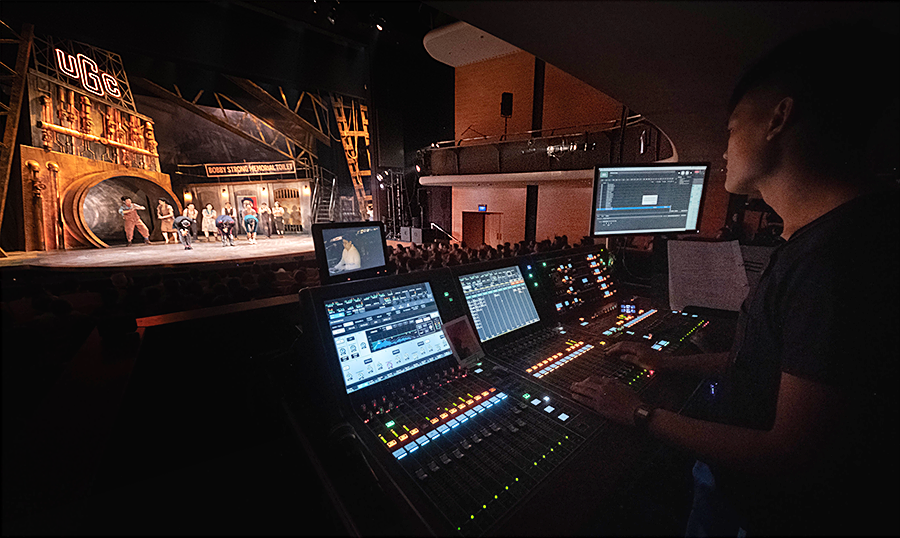 As mentioned, it has a high channel count running at 96kHz, and it allows the team to work on it simultaneously. The ability to do more and faster, to program faster during setup, which is essential with the limited time available and at the number of scenes and automation required. Its stability of software, overall reliability. I’ve never heard of a Yamaha console crashing. It’s good knowing you have a RIVAGE PM10 there, means you can continuously do what you’re doing without it failing, you can keep adding more inputs, more scenes, more processing, you can keep programming. I strive to never be in a position where I am limited by my equipment and falling short of delivering, performing, where I am stuck. With the RIVAGE PM10, I always have enough, tons of channels, tons of processing. And it’s not that you can’t fix that odd kick drum sound the drummer isn’t happy with. In fact, the RIVAGE PM10 sounds absolutely fine – not only FoH. With the channel split, I can spend a bit of time on the drummer’s in-ears and get it right for him, too.

Are there specific plugins or features you relied on heavily?

The RIVAGE PM10 is loaded with great sounding Rupert Neve plugins, some of which we used, but only gently, in very subtle ways. For instance, six RIVAGE PM10 reverb engines in the console were in use with settings dedicated to various sources, and it was great to have the processing power available for this.

Yamaha keeps adding to the software, and since I had last used the RIVAGE PM10, a theatre layer had been added, so I have not used it before. It adds theatre-specific features and functionality to the basic RIVAGE PMsoftware, DCA groups and more. For instance, each channel allows you to store multiple different EQs which can be recalled quickly. This proved very useful for us, considering the fact that the same cast members were playing multiple roles which involved quick changes to different costumes and specifically, different hats. Hats are our enemies because different hats produce different reflections into the omnidirectional sub-miniature microphones causing the same voice to sound different, something we were able to adjust with the help of the theatre layer.

Summing it up, how would you describe your RIVAGE PM10 experience with Urinetown?

Having used the RIVAGE PM10 a few times, including a rock musical and now also with a traditional, neo-classical piece, I now have a wider scope and a better idea of what I can do with it. It works fine with these different styles and fits either. The key to the success of any such production is in the planning and preparations. The choice of equipment depends on various factors such as availability and budget. While striving to push the envelope, you’re trying new things. But ultimately equipment translates to actual added value for the production. And, in my opinion, the RIVAGE PM10 has positively added value to this type of productions. Our entire team is very happy about the level of quality we achieved in the short amount of time available and, as part of the system, the console played an important role in this. Looking forward, I think for much of the large-scale orchestral work, it would be handy to have the RIVAGE PM10. 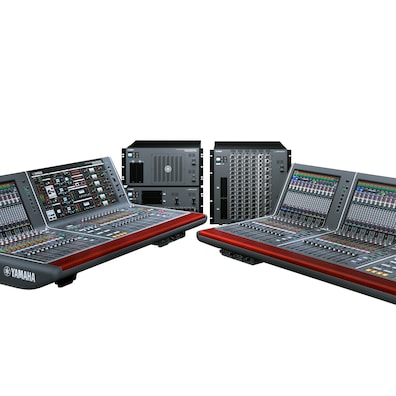 In terms of sound quality, operation, functionality, reliability, expandability, and more, the RIVAGE PM10 is a thoroughly refined flagship that defines the direction for future generations.