Some products have such far-reaching impact that they actually change the world. These are what people call "epoch-making" products. First introduced in 1990, Xeno Series trumpets are one example of such a product, and the instruments have continued to expand horizons and evolve with the artists who play them, towards the ultimate goal of ideal musical expression.

An ideal envisioned by a designer who was also a trumpeter himself, and a fiery drive to embrace each and every artist along the way toward ideal sound. Through a process of trial and error, Yamaha designers attempted to close the ever-so-miniscule gap between these two aspirations. Distilled over many long hours, what could be called the essence of designer and artist sensibilities is alive within the Xeno Series.

In what began as an effort to catch up to and surpass European and American manufacturers, Yamaha designers forged precious relationships with artists as the company’s trumpets continued to evolve, one step at a time. This is the story of those designers who went in search of authenticity in the form of the essence of the trumpet, brought about innovation by engineering its revolution, and achieved excellence on their journey that gave rise to an extraordinary world view which could not be rivaled.

Boasting the highest register of all brass instruments, the trumpet has a striking, triumphal sound. "Simply blowing into a trumpet is not enough to produce good sound. The player’s embouchure, posture, use of the breath, and countless other elements all have an effect on the sound produced. And because the player’s emotions are directly reflected in the sounds produced, even a single note has the power to move the listener," says Kenzo Kawasaki, who devoted 42 years of his life to Yamaha trumpets, from the time he joined Nippon Gakki Co., Ltd. (now Yamaha Corporation) in April 1966 at the age of 18 until his retirement in 2008. 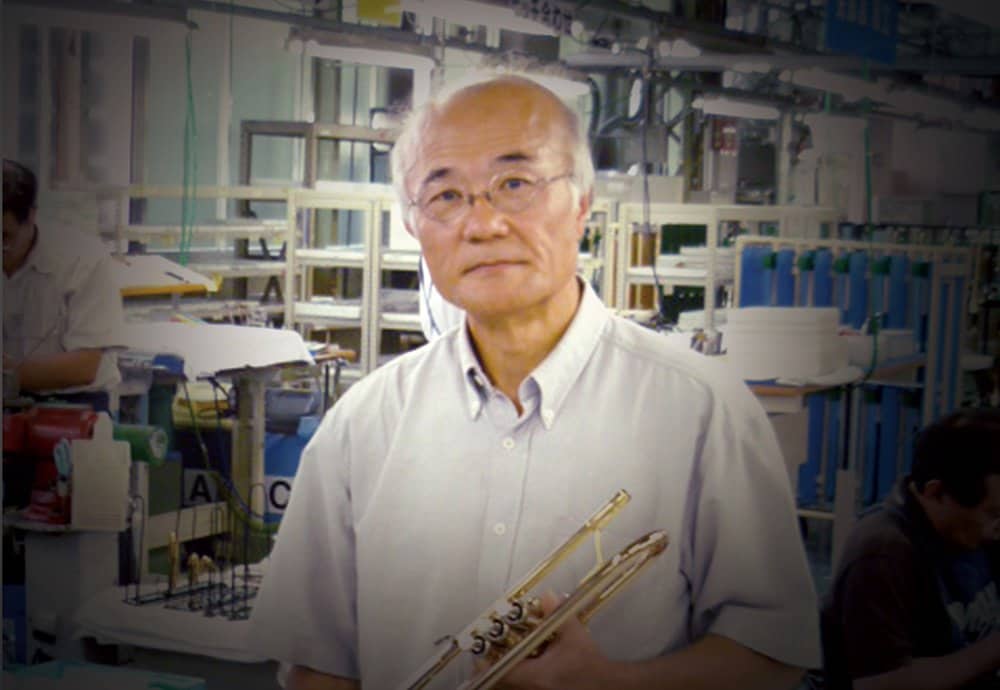 Yamaha became involved in the wind instrument business in 1963. It began with efforts to improve products from Nippon Band Instruments Co., Ltd. (Nikkan), a company which it had been involved in managing since the 1930s. Genichi Kawakami, who was the president of Yamaha at the time, insisted that "if we are going to take part in this business, then we shall aim to swiftly capture the top position worldwide" and brought Nikkan’s designers to Yamaha to devote their efforts to wind instrument research and production. Three years later, in 1966, Yamaha announced its first wind instrument, the YTR-1 trumpet. It was during this dawn of a new era that Kawasaki joined the company.

At the time, Nikkan did not even possess a proper blueprint, and the company instead relied solely on the experience of its craftspeople, using overseas products for reference. President Kawakami gave the order to "address any shortcomings with the guidance of a technical advisor from abroad," and in the summer of 1966, the company signed a contract for technical assistance from Renold Schilke, a former member of The Chicago Symphony Orchestra who ran a trumpet manufacturing company in Chicago. The idea of bringing an expert in from overseas was revolutionary at the time.

Schilke first came to Japan in October of the same year and would go on to visit Yamaha wind instrument factories twice yearly without fail for the following 16 years, until just before his passing. Schilke trumpets were lauded for their balanced pitch and the precision of their pistons, and Schilke devoted himself to instilling the essence of such craftsmanship into Yamaha wind instruments. 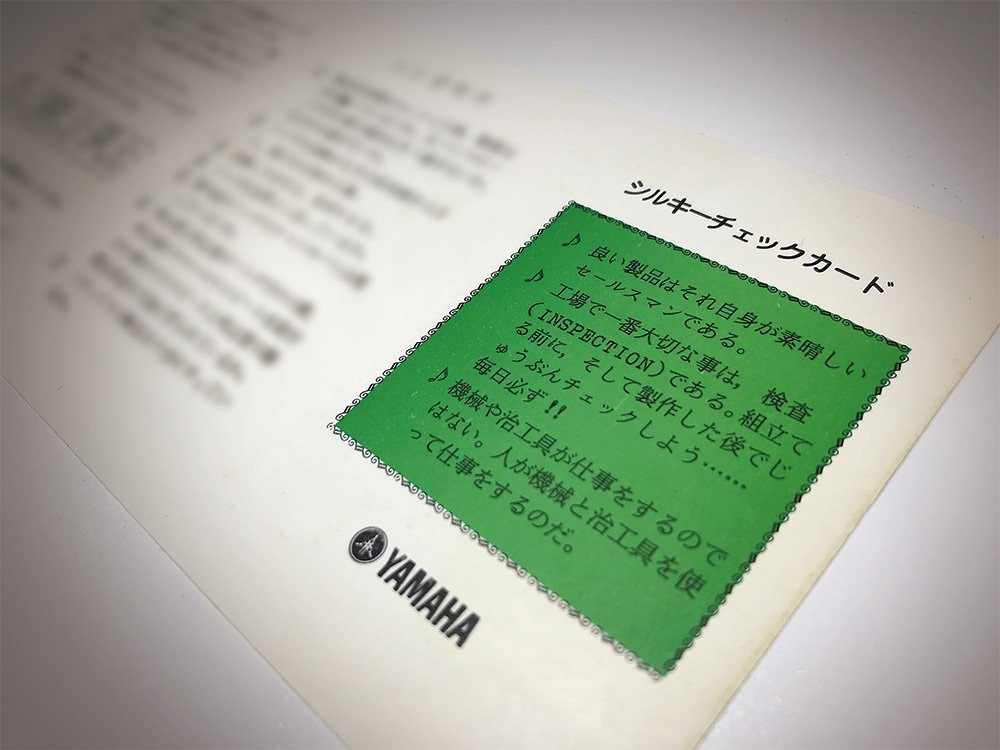 The Schilke Check Card became the foundation of Yamaha brass instrument production. On the front, some of the Schilke’s precepts are written: "A great instrument is the best salesman.""Inspection is the most important thing.” and “Machines don’t build instruments; they just help us."

During his visits to Japan, Schilke performed elaborate checks to ensure that instruments were being produced in accordance with his instructions. These checks were strict and uncompromising. In order to thoroughly implement Schilke’s advice on the production floor, Kawasaki and the others created pocket-sized Schilke Check Cards, which included detailed points for each step of the production process. Floor supervisors carried these cards with them at all times in an earnest effort to produce superior craftsmanship which would satisfy Schilke’s strict demand for quality. After one year of receiving assistance from Schilke, the company exhibited the Yamaha trumpets for the first time at a musical instrument trade fair in Chicago, shocking the huge US market.

During this period, the designers, prototype creators, and production personnel were all brimming with the desire to build a superior product. "Mr. Schilke, who was 56 years old when we signed a contract, believed that only Yamaha would be able to carry on his passion for developing superior-quality products, which was difficult for a company the size of his own, and so he entrusted his legacy to us fully," Kawasaki explained. Schilke said that the best salesman was a quality product, and it was this belief that would determine the future of Yamaha wind instrument production.

Schilke also had an expansive network of colleagues. This allowed Yamaha to have its instruments tested and assessed by European and American players, and Yamaha trumpets gradually began to gain respect within the market. 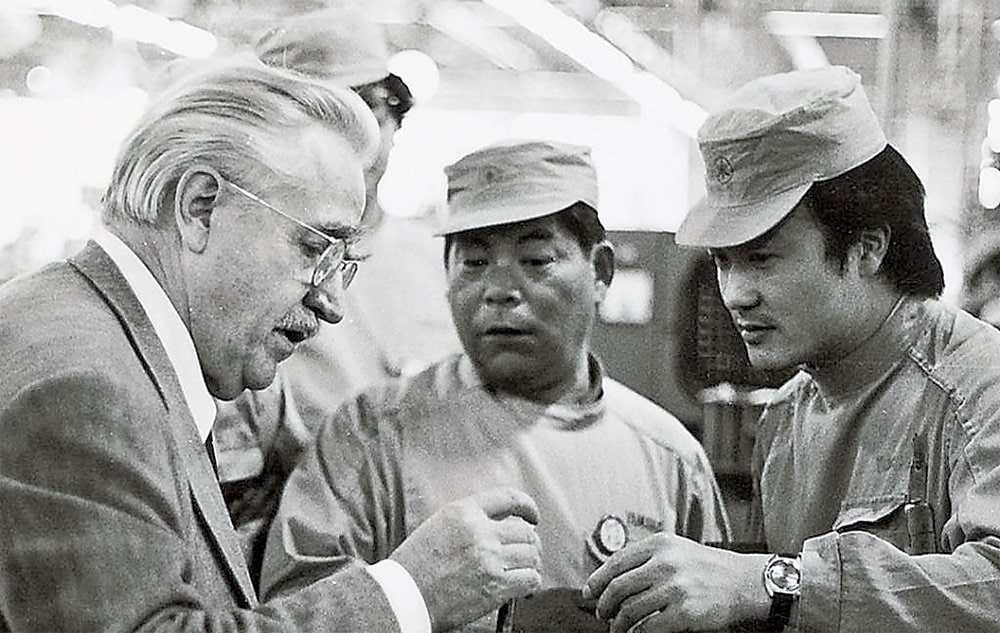