You've been using the CP series for many years now on tour and in the studio. What is it about the CP series that makes it your go-to stage piano?

Well you know, for me it's all about getting as realistic of piano sound as I can. The acoustic grand sound, that's what I'm after. And I also want a sound that will cut through when I’m playing rock and roll. If I'm playing with The Rolling Stones or The Allman Brothers band, for example, I really want the sound to stand out and to be clearly heard. That's what the CP series has been doing for me.

On your website you say you were first inspired to become a musician by another Yamaha artist, the great Ray Charles. Can you tell us about that? 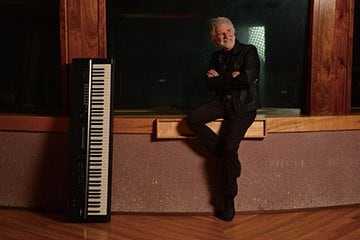 Oh absolutely. I must have been about 12 or 13 years old and my sister, Judy, had a date to go see Ray Charles at the coliseum in Tuscaloosa AL, where we grew up. My parents were away for the evening and they said, "Judy will you take Chuck with you?" And lucky for me she did. And man, I just had never seen a band like that, an artist like that. You had of course, the great Ray Charles, but you also had the Raelettes, you had Fat Head Newman on saxophone, you had Billy Preston playing organ, and it was just the most awesome thing I had ever seen in my life. I went away from that concert saying, "Well I know I don't want to be a doctor or a lawyer or an insurance salesman or anything like that. If I could ever be in a band that was anywhere near that good, that's what I want to do.

When you were on tour with The Rolling Stones you got a chance to stop at the Yamaha offices in California and check out not only the new CP4 STAGE but also the actual CFX acoustic piano that we sampled. What's your impression of the sounds and feel of the new CP4 STAGE? 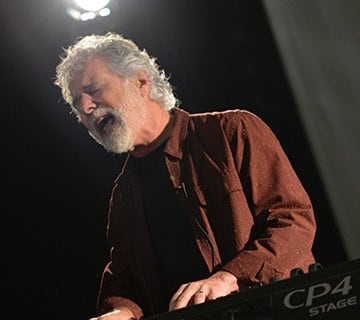 Well, you know, the CFX grand piano is just a marvel of acoustic technology. I think what they've done to emulate that technology in this instrument, the CP4, is amazing! It's very, very close. That's what you want in an instrument. I want reality, and that's what it's given me.

Do you think you will be using the new CP4 STAGE piano for your next tour?

Oh yeah, I can't wait to get this instrument on the stage and play live. Whether it's with The Stones or if it's with my band. I just can't wait. I'm very excited about it and it'll be onstage with me very soon.

Why do you love to play the CP4 STAGE piano?

Well, you know, I love this instrument because it has the best piano sound I've ever heard, and that's important to me. But there are certainly other attractive features that you have in the instrument. It gets great tine sounds, great reed sounds, it has strings and fantastic acoustic bass and so it's a very versatile instrument and in such an incredibly small package. And by the way, it’s pretty lightweight you know-I can put this thing under my arm and walk out the door which is very appealing. There are so many things that I love about the instrument, the versatility of it, but I'd have to say for me the main thing is that beautiful acoustic piano sound that it has. 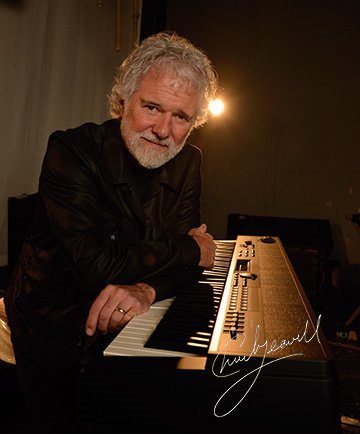 Chuck Leavell has been pleasing the ears of music fans for more than 30 years now. His piano and keyboard work has been heard on the works of Eric Clapton, The Rolling Stones, The Black Crowes, George Harrison, The Allman Brothers Band, The Indigo Girls, Blues Traveler, Train, Montgomery-Gentry, Lee Ann Womack, Lady AnteBellum, John Mayer and many, many more. In 1982, he was invited to assume a significant keyboardist/vocalist role for the Stones that continues today. Says guitarist Keith Richards: “Without the continuity that Chuck brings to us, the Stones would not be the Stones.” In addition to his musical expertise, he is a Board member of several important environmental organizations and is also the co-founder of The Mother Nature Network (www.mnn.com), the world's most visited environmental website. Chuck Leavell is one of music’s most respected and sought-after pianists, an active spokesperson for environmental issues and a devoted husband, father and grandfather. At his home in rural Georgia, you can find Leavell working in the woods, playing his piano and declaring he’ s fortunate to have three real passions in his life: “My family, my trees and my music.”

What was your design intention? 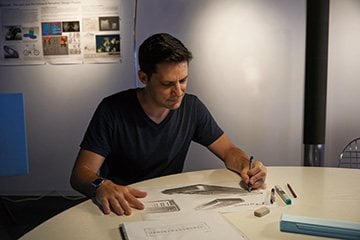 We knew when we started to design the new CP4 and CP40 that we wanted to create a timeless musical instrument. So we asked ourselves how a stage piano could remain relevant after a normal product lifecycle. Our desire was for players to enjoy it for a really long time.

For that reason, rather than following temporary, transitory trends, we decided to look at the legacy and heritage of Yamaha. We noted which design traditions are in Yamaha’s DNA, and we took those and adapted them to fit the new CP. We believe that as a result, the CP STAGE will have a long lasting design.

At the same time we wanted to provide players with an elegant musical instrument that can be used on any stage. Therefore, in order to make the new CP adaptable to a wide variety of environments, we decided that the design of the new CP should not be gaudy, obtrusive or particularly striking. But some attractive details were needed, so we decided to focus on the silhouette, with a small beveled edge that surrounds the piano to draw attention to its contours on the stage-especially under spotlights.

How did you balance "legacy" with "new"?

We created this balance by putting some legacy elements (like leather or cosmetic, textural appearance) with some other electronic and digital elements. Everything in harmony! But how do we find that harmony? It comes from the creative process-it means sketching many ideas, creating mockups, researching and analyzing our ideas, and working to improve the initial ideas from the first stage to later stages in greater detail; checking sample materials, paint color, textures… we made many renderings, mockups and prototypes to be sure that this “balance” that we were looking for is obvious and present in our final design.

What are the characteristic design features of the new CP4 and CP40 for the stage?

Considering it is an instrument that will be played for hours on end, we wanted to offer a completely unique and expressive experience for using and playing the new CP. It was so important that we incorporated a diverse range of textures and materials into the design. So we decided to adapt a different texture for each area. The background texture is leather-like, complemented by a nice matte finish on the control panel, followed by a long silvered line that divides the body from the keys. And finally, the CP’s incredible “piano touch” keyboard. 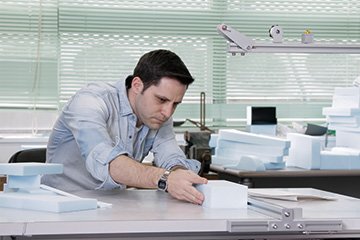 After deciding on the design direction, the team worked very closely for almost 2 years with the engineers and other developers, taking into consideration the proportion and harmony of all the elements of the stage piano, and of course trying to create a simple user interface for instant access and easy use.

Do you have any additional comments for the players?

In short, the CP4 and CP40 are stage pianos with a timeless design that will allow musicians to enjoy them for many years. They are instruments that can be used on different stages or locations. These pianos are the product of our passion for designing and developing the best instruments we can, and we hope that this is reflected in how much people enjoy playing and performing with them.

What was your aim when developing the CP4 STAGE? 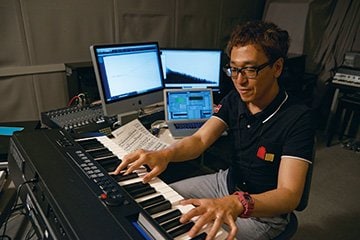 We wanted to enhance our piano sounds and make the CP4 STAGE a key instrument for live performances. Yamaha has focused on developing acoustic and electric pianos that produce high-quality sound. For the CP4 STAGE, we not only worked on sound quality but also paid close attention to the playability of the keyboard. In that regard, we took advantage of the performance qualities of wooden keys, a new feature in the CP series. Our aim was to design an instrument that allows players to directly express themselves.

What was your approach to developing the CP4 STAGE’s sound?

First of all, we tried to recreate the timbre of the CFX, Yamaha’s new flagship concert grand piano. The sound of the CFX is simply stunning. It is a highly expressive piano that produces a rich, harmonic spectrum and spans a wide dynamic range from pianissimo to fortissimo. This is a piano that completely captures the subtlest variations in keystrokes.

Yamaha worked hard to realize these qualities for the CP4 STAGE. We greatly expanded the waveform data used compared to our previous models, and enabled smoother keyboard control over changes in timbre.

The CFX is an incredibly versatile piano suitable for all kinds of musical styles, from classical and solo jazz to pop and rock. The CFX is featured in the CP4 STAGE as one of three grand piano presets, each featuring a different character. The other two presets are the Yamaha CFIIIS, a popular model that has earned a strong reputation, and the Yamaha S6, which is known for its distinctive warm and woody sound. There are many different presets for these pianos, featuring stereo or mono sounds, different effects, and different brightness settings, allowing the instrument to be used in all types of performance situations.

The CP4 STAGE also features electric piano voices from Yamaha’s famous instruments like the CP-80 piano and the DX, RD, and WR series of keyboards . We used our best modeling methods to reproduce the sounds of each of these instruments and enabled seamless and smooth changes in timbre depending on the force of the keystrokes. The CP4 STAGE features parameters that represent the physical attributes of acoustic pianos, including the stiffness of the hammers and the points where they strike the strings. This lets players adjust the timbre in the same way they would with a real piano.

The CP4 STAGE is loaded with high-quality effects based on Yamaha’s Virtual Circuit Modeling technology. We made full use of digital modeling and paid careful attention to every detail of the pre-amp design. The modulation effects are extremely well suited to electronic pianos and reproduce a wide range of sounds.

The CP4 STAGE comes with preset sounds that are useful for many kinds of live performances. Players can select from “performance” presets comprising layers of acoustic pianos and strings, acoustic and electric pianos, or synthesizer pads, as well as instrument ensembles commonly used on stage, such as brass or strings.

Could you comment on the playability of the CP4 STAGE? 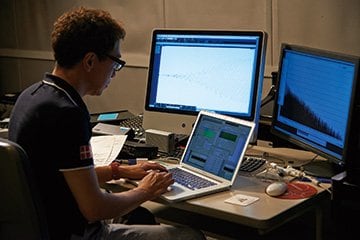 We developed many expressive voices for the CP4 STAGE, including the CFX piano voice. We also equipped it with a highly playable keyboard, using wooden keys for the first time in the CP lineup. By effectively combining these features, Yamaha has created a remarkable musical instrument that allows piano players to directly express themselves. We accomplished this by devoting much more time than usual in product development to perfect the playability of the instrument. That involved setting up prototypes in many different ways and having them tested by leading pianists active in various genres from Japan, the U.S., and Europe. Based on their evaluations and feedback, we decided on the ultimate design. As a result, Yamaha has produced a very playable and expressive instrument.