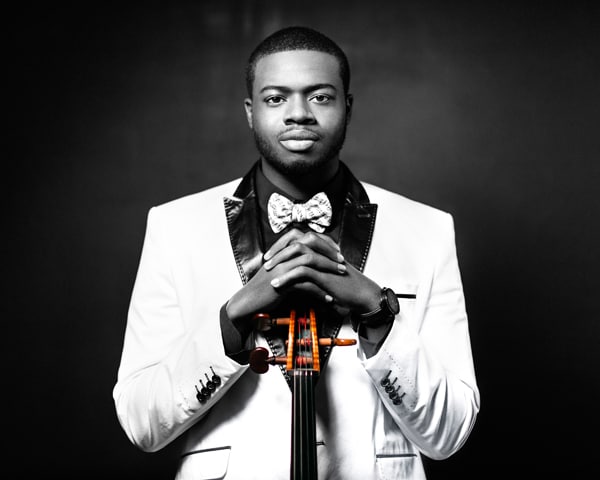 INDIANAPOLIS (April 22, 2015) — Yamaha announced that Kevin "K.O." Olusola, cellist and beat-boxer for the Grammy Award-winning vocal quintet Pentatonix, has joined the Yamaha Artist roster. He is currently playing an SVC-110SK Silent Cello on tour with the group.

Olusola (pronounced Olú-shola) is a multi-instrumentalist who learned piano, cello and saxophone while growing up in Owensboro, Kentucky. He performed at Carnegie Hall twice as soloist on the cello and saxophone and has appeared on NPR's "From The Top." Olusola enrolled in Yale University where he was pre-med and majored in East Asian Studies. He spent 18 months in Beijing becoming fluent in Chinese as a part of his Yale fellowship. He later went on to win second place in the "Celebrate and Collaborate with Yo-Yo Ma" international competition. Ma called Olusola's celloboxing version of "Dona Nobis Pacem" both "inventive and unexpected." In 2011, Olusola's "Julie-O" celloboxing YouTube video was featured by CBS, AOL, Huffington Post and Washington Post, among others. He was also named one of 100 "History Makers in the Making" by NBC's TheGrio and was hand-chosen by Quincy Jones to represent him in concert at the 2012 Montreux Jazz Festival alongside Bobby McFerrin and Chick Corea.

Along with his presenter spot with Pentatonix at the 57th Annual Grammy Awards, Olusola was a featured cellist in Pharrell's performance of "Happy." In March 2015, he released his solo debut effort, The Renegade EP, which entered the chart at #1 on Billboard Classical and Crossover Classical Albums Charts.

"I have played Yamaha instruments since I was young, specifically their alto saxophones, and I have always appreciated their top-notch quality when it comes to making instruments," said Olusola. "Now that I have their amazing Silent Cello, I look forward to taking it on the road."

Since bursting onto the scene in 2011, Grammy Award-winners and platinum selling recording artists Pentatonix has sold more than 2 million albums in the U.S. alone and amassed over 890 million views on their YouTube channel with more than 7.8 million subscribers. Their latest holiday album - That's Christmas To Me - sold more than 1.1 million copies in the U. S., becoming one of only four acts to release a platinum album in 2014. In February 2015, the group received their first GRAMMY® Award for Best Arrangement, Instrumental and A Cappella for their "Daft Punk" medley. The group just wrapped the North American leg of their "On My Way Home" tour which sold out of all of its 100,000 tickets. This spring, Pentatonix will make their film debut in Pitch Perfect 2 and will hit the road with Kelly Clarkson this summer.