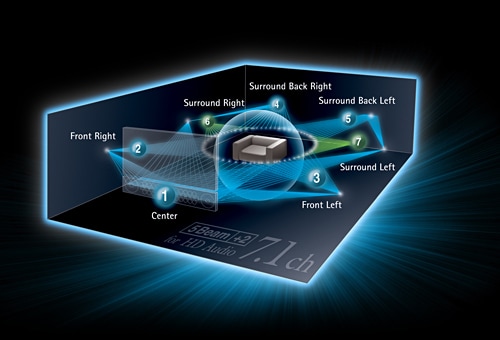 The primary advantage of the YSP Series is that simply placing a unit in the front of a room provides true surround sound, which you hear from the front and rear and also the left and right. Its key technologies are the production of sound beams via the control of multiple built-in speakers, and IntelliBeam, which automatically sets the optimum sound field for the size and shape of the room. Thanks to these two technologies, the YSP Series can reproduce 7.1-channel surround sound that is natural with an expansive feeling, qualities that cannot be achieved by virtual surround systems.

The front surface of a YSP unit features a number of compact beam speakers* installed in orderly rows. Control of each of these speakers on a time axis by individual amps creates five sound beams. Bouncing these sound beams off walls creates a surround environment.

Superimposing sound waves from the compact speakers installed in a row and adjusting their direction by delay control causes the axes of the sound waves to converge in a specified direction.

How the sound beams are created.

1. Sound from the speakers is transmitted radially.

3. The ripples of sound are further superimposed, creating a single strong wave — a sound beam.

4. The timing of the sounds from each speaker are delayed, controlling the direction of the beams.

When the microphone is placed at the listening position, it searches for the places suitable for reflecting the beams while it checks the size and shape of the room and the quality of the wall material, in order to automatically adjust the beam angle, the volume and the sound quality. This makes it easy to achieve the best surround sound environment. 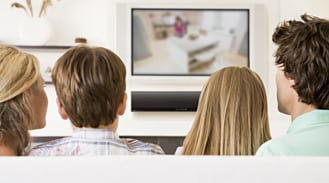 YSP models naturally expand the sound radiated onto the walls, producing surround sound without the unnatural feeling of sound linkages between the channels.

Ordinary virtual surround systems often sound different to different people because the surround sound is created artificially. This causes some people to become tired of listening after a certain amount of time. With YSP models, sound bounced off walls actually comes from behind the listeners, which means there is little difference in its effect between individuals, and people are unlikely to experience listening fatigue, even after long periods.