"Real Grand Expression" Sound, touch, pedals–perfectly integrated to give you the sensation of playing a grand piano.

By harmonizing the three key elements of sound, touch and pedals in a single piano, the CVP Series gives you the feeling that you are playing a grand piano.

It features a new Smooth Release function which can express sound with great clarity, and clearly enunciate staccato notes with the sound of lingering resonance heard when gently lifting your fingers from the keys. It succeeds in capturing the essence of a piano performance to create grand piano-like, richly expressive experiences.

Subtly reproduces resonance with the depth you hear from an acoustic piano.

Clavinova subtly reproduces even the unique resonances of an acoustic piano. It features String Resonance that expresses the mellow sounds of the other strings resonating, and Key-Off samples that actually deliver the delicate change in sound the instant the damper touches the string, just before you raise your finger from the key. The addition of these sounds results in tonal resonances that are not only beautiful, but also deep and rich.

The GH3 (Graded Hammer 3) keyboard faithfully reproduces the touch of a grand piano. 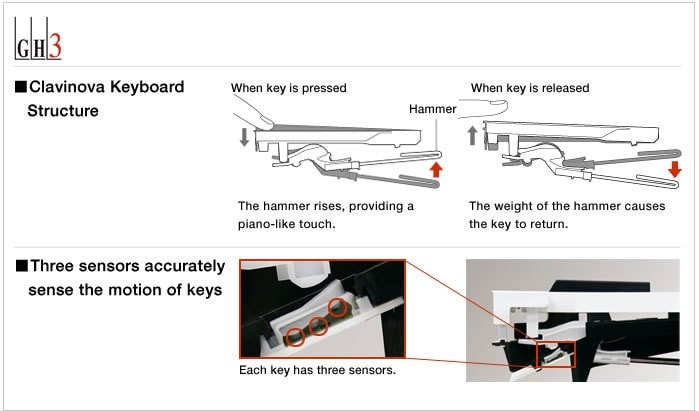 The touch of the Clavinova keyboard has been praised by pianists for a performance feel that makes you forget it’s a digital piano. The secret behind this superior touch is the same hammering system and spring-less mechanism as a grand piano. Depending on the weight of the hammer, the force of your touch and the natural key return when you release it, the Clavinova faithfully reproduces the keyboard touch of an acoustic piano from the heavy feel in the lower range to the light feel in the higher range. Also important is Yamaha’s unique three-sensor system, which accurately senses and interprets the behavior of the keyboard, just like a grand piano.

When playing continuously or with a light trill, techniques used in many pieces such as Für Elise, you can play with a bright, vivid feel.

Piano Room: your choice of piano and location.

The CVP-601 offers a great new feature called Piano Room that you can use when you really want to concentrate on piano performance and savor the piano sound. You can select from among three types of pianos - grand, pop grand and honky-tonk - and also a playing location, such as concert hall, cathedral or stage. Instantly, the tone quality changes to match that piano and place, giving your performance a totally different feel. When you’re playing the grand piano or pop grand, you can even choose to have the “virtual” piano lid open or closed.

The CVP Series provides many instrument Voices, in addition to piano.

Have fun playing different sounds, and producing the expressiveness unique to each instrument.

Super Articulation Voices reproduce true effects, as if you are playing that actual musical instrument.

This amazing technology intelligently recreates the authentic performance characteristics of acoustic instruments, such as guitar fret noises and slides or the breathing of a sax player. They are then blended perfectly into your performance. Select any of the many Voices and enjoy an enhanced feeling of realism, as if that instrument was actually being played. These automatically enhance your lead lines with the characteristic articulations of the original instruments, with no special playing techniques required.

Accompaniment Styles let you play along with virtual bands in numerous genres including rock and jazz. Change the Style and you can perform the same piece with a completely different mood.

Music Finder is useful when you can’t decide on the right Style or a Voice for ensemble performance. All you have to do is choose the name of the song you want to play and the CVP will call up the proper settings so you can get playing right away.

Style Recommender allows you to quickly find a Style that suits the way you want to play. Just play a bar or two of a simple rhythm, and a list of Styles that match it will be displayed.

On-Screen score display shows you what to play and when.

Follow along with the bouncing ball shown on the score as you play, to be sure of never losing your place.

Enjoy performing − even if you’re just starting out.

The guide lamps wait until you play the correct note, so you can practice at your own pace. 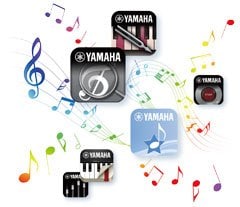 If you use an iPad, iPhone or iPod touch, Yamaha apps will make playing more convenient and enjoyable. Play a song and easily set the ideal Voice and accompaniment Style. Record your own performance and share it with a friend. Check out the apps and find the ones that meet your needs.

- Some apps require a connection to your instrument. To use apps connectivity, a wired connection (such as Yamaha i-MX1) is necessary.

- The CVP-601 does not offer wireless connectivity.

Visit our Yamaha MusicSoft online store to browse thousands of playalong songs designed to help you play your favorite songs by your favorite artists, following the notes and chords you play on your keyboard. A diverse collection of accompaniment Styles put a professional band at your fingertips. Styles are great for practice or performances, and are a handy songwriting tool as well!

LCD is easy to see and understand.

Musical notation and text are clearly displayed on a large screen, making the many functions easier to use. The screen not only shows the musical notation, it can display lyrics and chords.

USB Audio for recording your own performance.

The USB Audio Recorder* to record your performances on a USB flash memory for storage on your PC. This lets you compare two different performances to gauge your progress, or listen to them on a portable music player.

Volume adjustment is convenient for playing at home, where sometimes others may prefer you to play softly. You’ve probably experienced the fact that when the volume is low, it is difficult to hear treble and bass. On a Clavinova, however, the Intelligent Acoustic Control (IAC) automatically adjusts the sound, so you enjoy proper sound balance even at low volumes. Additionally, the volume dial automatically makes fine adjustments to the overall sound of the speaker system (EQ) at low volume. This ability to adjust volume without losing the rich and balanced sound is an exclusive Yamaha benefit, ensuring you always play with the utmost sound quality.

The "Acoustic Optimizer" system has been created to enrich and control resonance by physically adjusting the flow of sound waves, thanks to its design and positioning within the instrument. The combination of Acoustic Optimizer and digital technologies gives the CVP Series an incredible expressive capability.