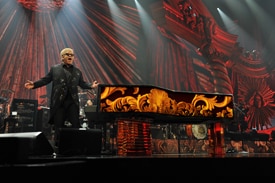 NASHVILLE, Tenn. March 1, 2015 — This winter, Elton John returned to The Colosseum at Caesars Palace with his one-of-a-kind production, The Million Dollar Piano. The iconic show is named after the unique instrument made by Yamaha exclusively for Elton.

After applause of his showmanship across mediums and continued enthusiasm from audiences around the world, Caesars Palace extended Elton's original three-year contract for three more years. His impeccable musical genius and eloquence, complimented by the visual experience of the million-dollar piano, is an awe-inspiring creative collaboration that continues to deliver spectacular entertainment.

"With three years of performances thus far, the show has become an integral part of the overall Las Vegas experience, "says Chris Gero, founder and president of Yamaha Entertainment Group. "We have a brilliant team in place to ensure the visual experience continues to appropriately accent the legendary musician at center stage."

The Million Dollar Piano marked its return on Jan. 16 and will run for 23 shows. Audiences can anticipate an incredible year showcasing his biggest hits and fan favorites such as "Rocket Man," "Circle of Life," and "Benny and the Jets," all enhanced with idiosyncratic illustrations.

Tickets for performances of The Million Dollar Piano are on sale now. Shows are currently on sale through April 14. Tickets may be purchased in person at The Colosseum at Caesars Palace Box Office, open daily from 10 a.m. to 10 p.m. PST, as well as online at axs.com, keyword "Elton John."